The family has been into film making business for more than sixty years. Late Shri. Amarchand K. Doshi, (father of the promoter Late Mr. Vinod Rai Doshi) was a pioneer in exporting Indian films in overseas market during the decade of forties under the banner of M/s Suresh Film distributors. Taking the legacy forward Late Mr. Vinod Rai Doshi established his company VR Pictures in the year 1962 and presented many super hit films like Faulad, Sachaa Jhutha ,Blackmail etc.

As change is the constant process , Mr. Gaurang Doshi revamped the company and rename it as Gaurang Doshi Productions Pvt Ltd, in April 2008. And he is the current promoter of the company. The company under his old name has produced many block busters and is ready to launch 3 projects under its new name.. 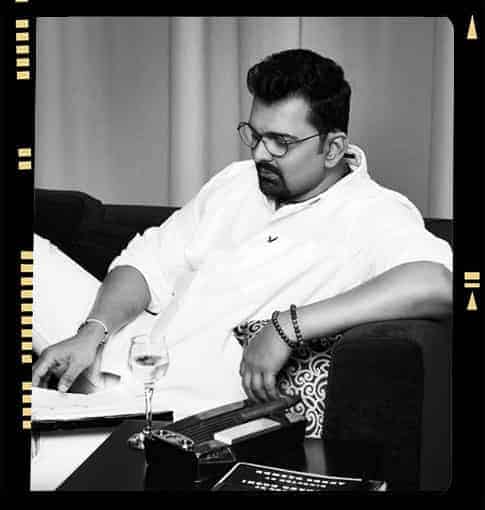 Gaurang Doshi (born 14th March 1972) is an Indian filmmaker, who primarily works in Hindi Cinema. He is the third generation of the Doshi family who decided to carry forward the legacy of filmmaking and production. Early from his father’s time, the Doshi family has introduced remarkable names in the industry giving them the break of their life. He is the only person in the industry holding his name in the 4 Limca Book of World Record.

Son of Late Vinod Rai Doshi, Gaurang at an early age of 19 years made his debut as a solo producer with the film Bawandar which was released in 2000. The film was based on the true story of Bhanwari Devi, a rape victim from Rajasthan, India. The film depicts the personal trauma, public humiliation and legal injustice that Bhanwari Devi went through while pursuing justice in the Indian courts. The film was showcased at several international film festivals and won multiple awards.

Under VR Pictures, the family production company of Gaurang, they produced some of the most remarkable Hindi films in the history of Indian Cinema like Nastik, Sachha Jhutha, Black Mail, Dil, Beta, Raja and many more. After taking over the family business from his father, Gaurang renamed the VR Pictures to Gaurang Doshi Productions Private Limited, keeping the family company running.

Gaurang was born in Bombay, India (present-day- Mumbai) to film producer Vinod Rai Doshi, founder of VR Pictures and Madhukanta Doshi. He has Gujarati Hindu ancestry from both his father’s and mother’s sides. He studied at Little Angel High School and later graduated from H.R. College of Commerce both in Mumbai.

Being raised in a family surrounded by filmmakers, Gaurang from an early age knew what his ambition was. He started his career in the industry as an assistant to the famous film producer J.P. Dutta for the movies Yateem and Hathyar and the director duo Abbas Mustan. To enhance his experience in the career he had decided to step into, Gaurang worked with the production and technical team in the movies like Dil, Beta, Raja which were produced by his father.

Since his birth, Gaurang had the art of film production in his bloodline and with his father, as his biggest mentor, he mastered the art giving his first solo hit as a producer Bawandar. His father challenged the film to see his creativity towards cinema and Gaurang graced it with flying colours as the film was internationally acclaimed and received seven awards globally.

After the promising feedback from the audience and the critics for his first solo production Bawandar, Gaurang knew there was no looking back. At the mere age of 22, he gave the Blockbuster Hit titled Aankhen starring Amitabh Bachchan, Akshay Kumar, Sushmita Sen, Arjun Rampal and Paresh Rawal. Aankhen was a life changer for Gaurang as it gave him global recognition for producing a film with an unusual storyline. Back in the days, Hindi cinema only saw the top actors as heroes in the films but the face of filmmaking changed when he decided to cast the renounced Bollywood actor Amitabh Bachchan as a negative lead and portray the three main actors as blind. The film went through a lot of criticism in the initial days but Gaurang stood firm in his decision and the results paid off making it the second-highest grosser film in the year 2002. Aankhen had its worldwide premiere in Malaysia at the 3rd IIFA Awards ceremony on 5th April 2002. Aankhen with its alternate ending for Indian cinema and overseas viewers made it the first of its kind. .

Gaurang Doshi was the 1st person in the industry who launched the concept of Belly Dancing in the Bollywood industry through his movie Deewaar. He got 5 dancers from different nationalities for the song Marhaba Marhaba

After years of break from film-making, Gaurang is all set to make a comeback with some web series projects. According to a recent interview, he also disclosed that the sequel of Aankhen tilted Aankhen Returns is also in the making and the official announcements will be made later this year in 2022. Apart from Aankhen Returns other projects such as 7th Sense (web series), Line of Fire (web series), Happy Anniversary (feature film), Indian In Danger (feature film) are also in talks with the actors and will be going on the floor one after the another.

Talking about his past experience in the industry, Gaurang mentioned he gets a good night's sleep every day of his life knowing he introduced or gave a comeback break to some of the names in the industry who marked their peak in their respective careers. Name like KK Menon for Deewaar, Bipasha Basu for a song in Aankhen, Prasoon Joshi as a lyricist, Aadesh Srivastava, Sushmita Sen and Amitabh Bachchan as a comeback during Aankhen, Vipul Shah as director, Paresh Rawal as a lead actor in a film, Shirish Kunder as the editor, Hungama (1st time creating a CD rom game of 3 blind men robbing a bank which was introduced in IIFA by Mr. Amitabh Bachchan), Krishna Beuraa as a signer for Deewaar, Aatish Kapadia and Rajat Arora as writers for films Aankhen and Deewaar respectively, comeback for Shridhar Raghavan during Deewaar, introduced Shreyas Talpade as a chaiwala in Aankhen.

We are an international, award-winning, creative Film production company. We provide preproduction, production, and post production services. Our clients include several reputed production companies from across the world. We have exciting web series and feature films in development and coming your way.

Maisha Infotech has been helping organizations throughout the World to manage their IT with our unique approach to technology management and consultancy solutions. Grant users appropriate access rights and permissions to view cases, issues, changes, contracts, assets, solutions, and reports.